Traditionally acupuncture involved the use of acupuncture needles. The needles are sterilised singe-use thin stainless steel needles. The needles are rounded at the tip and do not have a cutting edge unlike those used for injections. They separate the muscles rather than cutting them and are generally very well accepted. There is occasionally a brief moment of sensitivity as the needle penetrates the skin. The acupuncturist then feels for the “De Qi” sensation which is a feeling of resistance at the tip of the needle. In general the needles loosen up towards the end of the treatment and may fall out. The needles are usually kept in place for approximately 15-20 minutes.

Short needles are used to prevent accidental removal when the animal moves. Most animals are lying down during the treatment with minimal restraint. Once the needles are in place most animals relax, often falling asleep.  After a treatment many patients go home and have a very deep sleep, which is an important part of the healing process.

Trigger points are knots or tight areas felt when carefully examining individual muscles.
Trigger points can lead to many musculo-skeletal problems and are painful and debilitating. Treatment involves using the TENS machine at the Trigger points. The resulting improvement in range of motion is often immediate. Trigger point therapy is a great adjunct to Acupuncture and generally is preformed before Acupuncture treatment.
There is a lot of overlap between Trigger points and Acupuncture points.

Laser Acupuncture involves the use of a low intensity cold laser applied to the skin covering acupuncture points. The action of the Laser applied to Acupuncture points is similar to that of needles. Needles are generally left in place for between 5-20 minutes, however with Laser acupuncture the treatment time per point is shorter. The Class of Laser used depends on the treatment time and level of penetration into the tissues needed. It is particularly useful at superficial points, in areas that may be painful to needle, for scars and wounds, tendon and ligament problems and in animals which are needle sensitive/phobic. It is also very useful in cats as they may resent being held in one place for too long. There is eye protection for everyone including Doggles for the dogs. Many patients are instantly featured on social media as most owners can’t resist taking their photos 🙂

Aquapuncture involves the injection of liquids at acupuncture points. These liquids may be products such as of the “Heel” brand. These are multiple homeopathic preparations suspended in combination designed for particular diseases. Other liquids used are liquid vitamins or sterile saline.

Aquapuncture is often used to prolong the effects of acupuncture following a dry needling treatment, especially in chronic diseases.

Moxibustion is the heating of acupuncture points through the  burning of a herb above the skin covering the  acupuncture point. The herb that is used is Mugwort or Artemisia vulgaris. It is rolled into sticks like cigars which burn very slowly. The smell is somewhat similar to marijuana and is therefore generally unacceptable in the veterinary clinic setting and it can also set off the smoke alarms. There are smokeless rolls available, although they do not always burn so well.

Moxibustion is ideal for home therapy to enhance the effects of dry needle acupuncture. It is generally well accepted by animals.

As part of a Rehabilitation Plan some of the exercise equipment may be used. Owners will be able to start a home exercise program to restore function and build strength for their animals.

The clinic set up allows for the comfortable examination and treatment of the patient.
The hydraulic mechanism in the table is very smooth so animals don’t find it frightening to go onto it. The rubber mat is non slip and the beds are comfortable. Most animals relax quickly and often fall asleep during the treatment. The table has a large top comfortable enough for a Rottweiler to lie down on. The table is a back saver for the owners and myself. 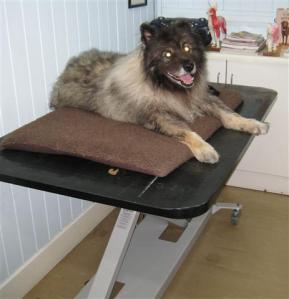 The Consultation Room contains the hydraulic table and chairs for the owners so they can sit beside their animals. The walls feature Esther’s personal artworks. All this makes for a cosy and comfortable environment for both owners and animals. 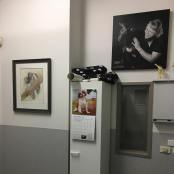 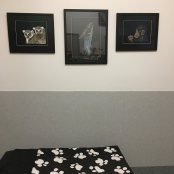